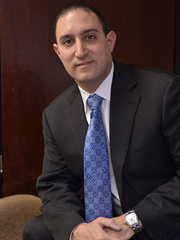 Attorney Bruno V. Gioffre, Jr. was born and raised right here in New York in a family that supported itself through small business ownership in the retail liquor business. It was through working in the liquor industry, which enabled Bruno to put himself through law school. Bruno graduated from Iona College in 1995 after studying pre-law on a baseball scholarship and in 1998 graduated from Pace University School of Law where he focused on criminal law.

Bruno has been licensed since 1998 and is authorized to practice in both the state and federal courts of New York and Connecticut.. He is also licensed to practice in the state of Florida. Bruno began his legal career working as an Assistant Attorney General for the New York State Attorney General’s Office. There he learned civil rights and police brutality law, as it was his job to defend the New York State Department of Corrections, New York State Police and New York State Division of Parole in Federal Civil Rights and police brutality cases. Bruno also honed his legal writing and oral argument skills by handling federal appeals for the State of New York. Bruno also worked for a short time for the Florida Attorney General representing the State of Florida in death penalty appeals.

In late 2002 Bruno returned from Florida and started in private practice based in White Plains, NY. He worked on several high profile cases, including:

If you require the assistance of a lawyer, Bruno Gioffre stands ready to assist you today.

At no cost, no obligation, initial consultations at your convenience either on the phone or in person.

In 2009, Bruno Gioffre founded his own practice to personally serve the public with high quality legal services. In addition to practicing liquor license and criminal defense law, Bruno also practices: